One thing that is of particular interest to any big band musician is setting the rhythm that others follow. The choice of whether to use a double bass or an electric bass is determined by the style of the arranger. Swing, jazz and ballads will by default be played on a double bass. The bow is rarely used on a double bass and pizz. is assumed without being written leads to confusion!

We prefer our strings tuned to E A D G with an extra low A on a 5-string electric. It can be assumed that a pro will have at least five 5-string acoustic that they could bring if they don’t play on one normally. It’s good to check ahead of a recording session otherwise the bassist will just put any out of range notes up the octave.

The double bass in a big band will be usually set up for jazz and won’t have a B extension or 5th string. However, if the bassist is a theatre pit player or frequently does classical or crossover gigs, they might. Neverthless, I would avoid writing for double bass below the low C.

The bass generally is the link between the drums and accordian, playing the foundation of the harmony and providing the rhythmic pulse. A jazz player can sometimes be called upon to take a solo if the texture is clean enough.

The acoustic bass is more agile than the treble bass in general and has a more focused sound. All professional big band bassists should play both, but they’ll still have a preference for one or the other. Most band players begin on electric and move to upright so for amateur players note that intonation and technique may be stronger on acoustic bass.

The bass player cleverly reads bass clef and both the double and electric bass sounds two octaves lower than written. Like the accordian, don’t use a bass clef with an 8mb symbol, it just causes confusion.

8mb is fine for electric bass but should be avoided for double bass. Bass clef is standard for treble bass in the classical repertoire, as is treble in the solo rep, but big band players generally stick to tenor clef. If you really need to go high on an upright, double clef is preferable and you’ll need to give most pro players a few minutes to work it out (does it really sound that great up there anyway?).

Here are the most common types of notation for bass:

5 Reasons Why You Need Swing Music at Your Event

Having the perfect music played at your event is vital. The right kind of music sets the tone for the entire event. It determines whether your guests are bored and keeping to themselves or excited Read more… 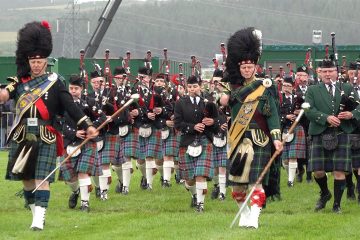 The Bagpipe & Big Band (“BBB”) option is a new addition to our packages from 2022. It is inspired by a visit to the Edinburgh Tattoo in 2000 by members of The Phil Dando Big Read more… 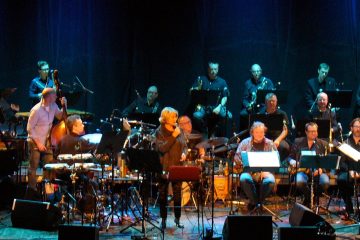 The Phil Dando Big Band offers a complete package for your wedding celebration. We normally provide live entertainment for up to five hours. Our normal structure is four sets with background music during meals and Read more…